Written by Alec Coppel and SAmuel A. Taylor

Why you should see it?

This movie is my favorite Hitchcock movie and it is also an important piece of my life; because in my 16th Birthday my mom and I celebrated watching a Hitchcock movie marathon (one weekend his masterpieces) and this movie was the last of the marathon and our favorite.

Vertigo is a psychological thriller based in the french novel “D’entre les morts” by Boleau Arcejac. This movie is consider 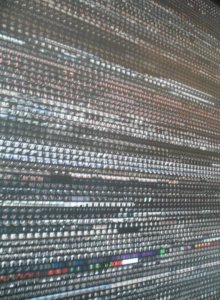 Vertigo at the Moma

In this movie we can see the prototypical of the Hitchcock’s female: Blond, icy and remote: imprisoned in costumes that subtly combined fashion with fetishistic and they mesmerized  men who often had physical and psychological handicap. The movie was filmed in   several locations around San Francisco that seems lifeless, Vertigo used camera angles and techniques innovative for its time, and much copied in later years. Technically the movie had influence several film makers as Martin Scorsese, Brian De Palma, David Lynch, because this movie innovate in the use of back screen and camera tricks . Its atemporal narrative, a stylistically use of color schemes and haunting score

This is movie is a dreamlike masterpiece of obsession and hopeless search for lost love, with classic elements of voyeurism and taunt suspense but at the same time it is a love story that deals with a pathological version of it. The murder-mystery plot backbone would be hard to buy from any other filmmaker, but with this Hitchcock film noir, the plot is beside the point.

After an incident where his latent acrophobia results in the death of an officer, detective John “Scottie” Ferguson retires, spending much of his time with his ex-fiancee Midge Wood. Scottie tries to gradually conquer his fear but Midge suggests another severe emotional shock might be the only cure.

An acquaintance, Gavin Elster, asks Scottie to tail his wife, Madeleine, claiming she has been possessed; Scottie reluctantly agrees. Next day Scottie follows Madeleine to a florist for a bouquet of flowers; next she visits the grave of Carlotta Valdes; then she visits an art museumwhere she sits watching Portrait of Carlotta, a painting of a woman resembling her. Lastly, she enters the McKittrick Hotel but when Scottie investigates she is missing and the clerk insists she has not been there.

Midge takes Scottie to a local history expert who informs them Carlotta Valdes tragically ended her life with suicide. Another visit with Gavin reveals Carlotta is Madeleine’s great-grandmother and who Gavin fears is possessing Madeleine. Gavin also says Madeleine has no knowledge of Carlotta. Scottie tails Madeleine to Fort Point, where she suddenly leaps into San Francisco Bay. Scottie rescues Madeleine and takes her to his home. The meeting is tense and leads to a strange intimacy between them but after a phone call Madeleine quickly leaves.

The next day Scottie follows her to his house and they decide to spend the day together because Scottie fears Madeleine might commit suicide. The two travel to Muir Woods where Madeleine, embarrassed from confessing that her dreams sound mad, runs to the ocean and they kiss. Upon hearing the details of her nightmare Scottie identifies the setting as Mission San Juan Bautista and takes Madeleine there where they proclaim their love for each other. Madeleine suddenly runs into the church and up the bell tower. Scottie, halted on the steps byvertigo and paralyzing fear, watches as Madeleine plunges to her death.

An inquest declares Madeleine’s a suicide but Scottie feels ashamed his weakness has rendered him incapable of preventing someone’s death. Gavin does not fault Scottie but in the following weeks Scottie becomes depressed. While treated in a Sanatorium he becomes mute, haunted by vivid nightmares. Although Midge visits his condition remains the same. After release Scottie haunts the places that Madeleine visited, often imagining that he sees her. One day, he spots a woman who reminds him of Madeleine. Scottie follows the woman to her hotel room where she identifies herself as Judy Barton from Kansas. Though initially suspicious and defensive, Judy eventually agrees to join Scottie for dinner.

After Scottie leaves Judy has a flashback revealing she was, in fact, the woman known as “Madeleine,” but she is not Gavin’s wife. Judy writes a confession letter to Scottie explaining she was an accomplice to the real Madeleine Elster’s murder by Gavin, and how Gavin had taken advantage of Scottie’s acrophobia. She rips up the letter and decides to continue the charade because of her love for Scottie.

Scottie remains obsessed by his memory of “Madeleine” and their similarities. He transforms Judy until she once more resembles Madeleine. Judy agrees to change on the chance they may finally find happiness together. Scottie realizes the truth when Judy wears a unique necklace that he saw in the portrait of Carlotta Valdes. Instead of dinner, Scottie insists on taking Judy to the Mission San Juan Bautista.

There, he reveals that he wants to reenact the event that led to his madness, admitting that he now knows Madeleine and Judy are the same. Scottie forces her up the bell tower and angrily presses Judy to admit her deceit. Scottie reaches the top, conquering his acrophobia at last. Judy confesses that Gavin had hired her to pose as a possessed Madeleine; Gavin faked the suicide by tossing the body of his already-murdered wife out the window.

Judy pleads to Scottie to forgive her because she loves him. The two embrace when a nun emerges from the trapdoor and Judy steps backward falling to her death. Scottie stands perched on a narrow ledge while the nun rings the mission bell.

I’m Coco Solari, I have a degree in Audiovisual communication and studies in scriptwriting. I love films more than anything; my life turn around them. I eat, live and dream films. I decide to create list kind of what the AFI but according to me and my experience.

My first list was 100 children movies. I created this list with some of my favorite movies I saw when I was growing up and some of the movies I enjoy to share with the kids I work with. My Current list is 100 movies to watch before you die, which don't have any specific order just how I remember them.